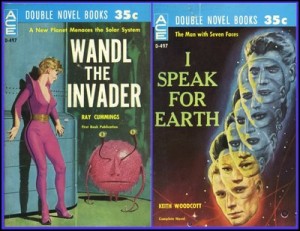 I grew up reading ACE Doubles and D-497 (1961) was always a favorite because of the cool cover on Ray Cummings’s Wandl the Invader. Wandl the Invader is a sequel to Cumming’s Brigands of the Moon. A mysterious “Tenth Planet” enters the Solar System and our heroes, Haljan and his friend Snap, battle against the Forces of Evil. Wandl the Invader was serialized in Astounding Stories in 1932 so you can gauge the amount of pulp in the story (a lot!). “Keith Woodcott” is a pseudonym of Science Fiction writer, John Brunner. A Federation of Worlds threatens Earth as it prepares to launch it’s first starship. The Federation demands Earth send them a “representative” who would live among Federation members for year so they could determine whether Earth is worthy of becoming a member or not. The leaders of Earth come up with a clever strategy to fool the Federation: they use psychic technology to house six personalities in one body (two of the personalities are females, the other four are males). Each personality has its own scientific expertise. I Speak for Earth has a clever ending that forecasts some of John Brunner’s later SF. If you’re a fan of classic SF, here are two good examples.

16 thoughts on “FORGOTTEN BOOKS #342: WANDL THE INVADER By Ray Cummings/I SPEAK FOR EARTH By Keith Woodcott”