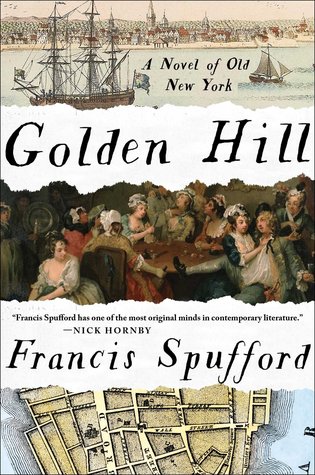 Back in 1746, New York City had a population of 7000 residents. A great many of them were slaves. A “Mr. Smith” arrives in New York after a six-week journey on a ship from London (population, 700,000). Mr. Smith immediately runs into trouble. He encounters problems converting his British note into ready cash. The cash Mr. Smith does manage to convert is promptly stolen.

Mr. Smith’s secrets slowly become revealed but what is plain from the first few chapters is that Smith falls in love with the snarky Tabitha Lovell, daughter of his banker. Tabitha’s acid-tongue makes her unpopular in polite society, but Smith tries his best to court the difficult woman. If you’re in the mood for a historical novel with a little romance, I recommend Golden Hill. I read the book after hearing the National Public Radio interview with the author. It’s worth a listen HERE. GRADE: B

6 thoughts on “GOLDEN HILL: A NOVEL OF OLD NEW YORK By Francis Spufford”