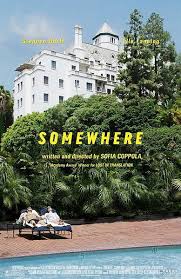 I’m in the minority on my opinion of Somewhere. Roger Ebert gave it four stars and A.O. Scott of the New York Times put Somewhere on his Year’s Best Movies list. My son, Patrick, also thought Somewhere was one of the best movies of 2010. After watching Somewhere, I told Patrick how they came up with the title of the movie: “When you’re watching it, you wish you were somewhere else.” Sofia Coppola wrote and directed this movie about a Hollywood actor whose life seems meaningless. His 11-year-old daughter gets dumped on him because his ex-wife needs “space.” A series of meaningless scenes follow: a trip to Italy, an award show, a helicopter ride to the daughter’s summer camp. Dull, dull, dull. I suppose we’re supposed to think the actor’s life sucks, but I wasn’t convinced (plenty of women in his life). I’ve seen Sofia Coppola’s Lost in Translation and Marie Antoinette. Coppola’s movies always distance the audience. I love movies that draw me in and completely involve me. Coppola’s movies keep me at an arm’s length and annoy me. GRADE: C-