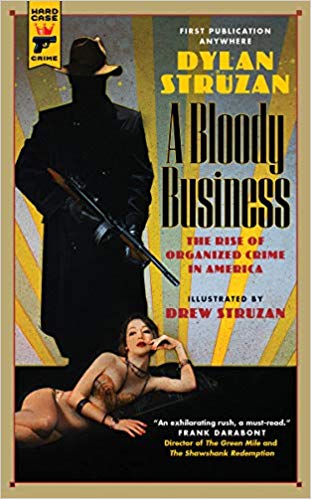 Dylan Struzan’s brilliant account of the rise of Organized Crime in America, based on 50 hours of interviews with Vincent “Jimmy Blue Eyes” Alo, reveals how Lucky Luciano, Meyer Lansky, Dutch Schultz, Bugsy Siegal, Al Capone, Nucky Johnson, and other gangsters built their criminal empires. In 1919, the National Prohibition Act passed making it illegal to produce, distribute, or sell alcohol products. That opened the gates for gangsters to supply liquor that Americans craved. It also generated millions of dollars of profit for those gangsters involved in Black Market liquor, speakeasies, and gin mills. Of course, turf fights raged as gangsters fought to expand their territories.

Dylan Struzan’s graphic accounts of Vincent Alo’s exploits in the underworld ruled by Lansky and Luciano–bootlegging, violence, and murders–shows the dynamics of these criminal enterprises. I found a A Bloody Business credible and fascinating guide to the mobsters’s methods and techniques. The timing of this book could not have been better: 2019 is the Hundredth Anniversary of Prohibition. And now we have a scintillating history of the consequences of the ill-fated Eighteenth Amendment. Highly recommended! GRADE: A

12 thoughts on “A BLOODY BUSINESS: THE RISE OF ORGANIZED CRIME IN AMERICA By Dylan Struzan”