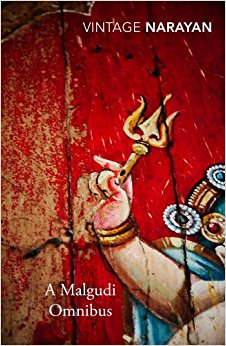 Generous Atanu sent me a copy of R. K. Narayan’s A Malgudi Omnibus. R. K. Narayan is one of India’s greatest novelists. This omnibus includes Swami and Friends (1935), The Bachelor of Arts (1937), and The English Teacher (1945). Narayan creates a world of Malgudi very much like Anthony Trollope did with his Chronicles of Barsetshire and William Faulkner did with Yoknapatawpha County. Within Narayan’s Malgudi, the entire culture of India exists to be explored. In Swami and Friends, friends–Somu, Sankar, Mani, and the Pea–find their relationship upset by Rajam, who is the son of Malgudi’s new police superintendent. Swaminathan joins a mob protesting the recent arrest of a prominent Indian politician in Malgudi, The mob’s nationalist fervor causes Swaminathan to shatter the windows of his headmaster’s office by throwing a rock. Swaminathan’s action causes a change of schools which changes his friendship with Rajam. Swami and Friends delves into the nature of friendship and change.

In The Bachelor of Arts a young man named Chandran falls in love with Malathi but Chandren is rejected by Malathi’s parents. Distraught, Chandren lives on the streets and finally undertakes a journey to flee from his rejection and pain. I liked the ending Narayan concocts.

8 thoughts on “A MALGUDI OMNIBUS By R. K. Narayan”