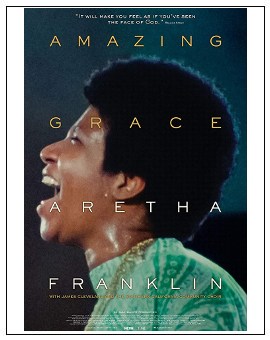 Back in 1972, 29-year old Aretha Franklin decided she wanted to record a live gospel album at the New Temple Baptist Missionary Church in Watts, California. After two evenings of singing and recording, Franklin produced the best selling gospel album in history: Amazing Grace. What most people did not know was that these two evenings were filmed by a young, up-and-coming director named Sydney Pollack with a small crew armed with 16mm cameras. But Pollack and his crew neglected to slate the shots so they had hours of film and hours of sound, but no way to sync them up. Warner Brothers shelved the project and nothing happened for years.

Finally, producer Alan Elliott bought the footage and brought in film editor Alan Elliot to use digital technology to bring the film and sound together. But, then another problem rose up: Aretha Franklin sued Elliott in 2011 for using her likeness without her permission. Then in 2015, Franklin blocked the film from being screened at the Telluride and Toronto film festivals. After Aretha Franklin’s death in 2018, Elliot showed the documentary to Franklin’s family and got their permission to show the film.

Amazing Grace shows Aretha Franklin at the height of her powers. The record that came out of these live recording sessions became Franklin’s best selling album. If you’re a fan of Aretha Franklin this film is a must-see. What is your favorite Aretha Franklin song? GRADE: A
AMAZING GRACE TRACK LIST:
Disc 1
Mary, Don’t You Weep
Precious Lord, Take My Hand/You’ve Got a Friend
Old Landmark
Give Yourself To Jesus
How I Got Over
What a Friend We Have In Jesus
Amazing Grace
Disc 2
Precious Memories
Climbing Higher Mountains
[Remarks By Reverend C. L. Franklin]
God Will Take Care of You
Wholy Holy
You’ll Never Walk Alone
Never Grow Old