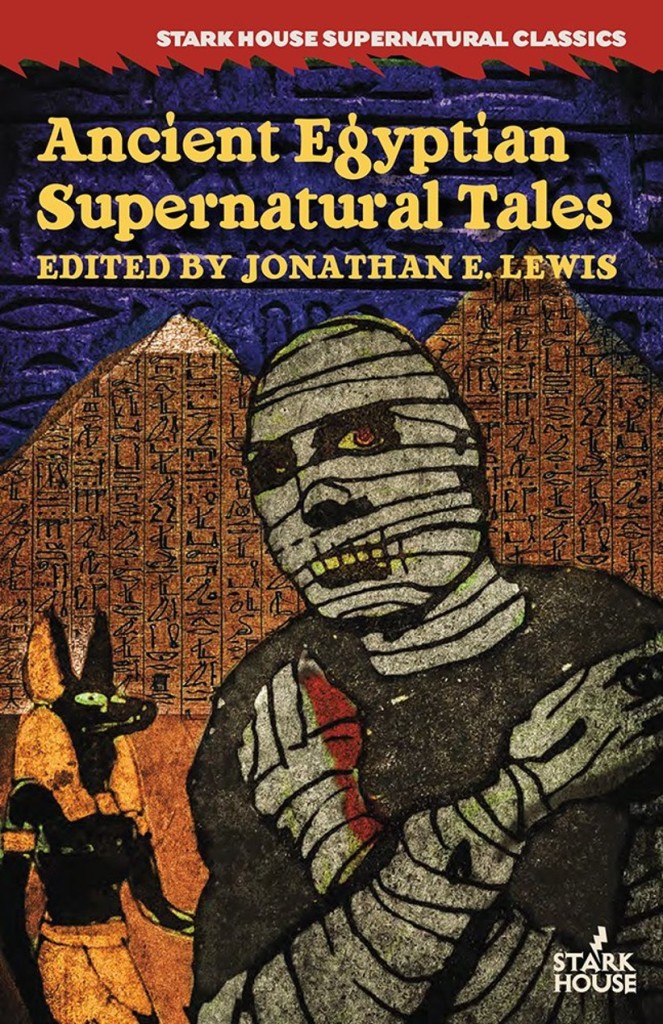 Who doesn’t like a good mummy story? Certainly, Jonathan E. Lewis (son of former DAPA-EM member Steve Lewis) does. He writes an informative introduction to the history of mummies and supplies insightful comments before each story explaining why the story was included in this fine collection. I was familiar with Poe’s “Some Words With a Mummy” and Arthur Conan Doyle’s “Lot No. 249” but most of these stories were new to me. I especially liked Frank Belknap Long’s “The Dog-Eared God” and the two Sax Rohmer stories: “The Cat” and “The Whispering Mummy.” If you’re looking for some suspenseful Summer fiction, Ancient Egyptian Supernatural Tales will wrap you up in thrills and chills! GRADE: A
TABLE OF CONTENTS:
Introduction by Jonathan E. Lewis
Part I: The Genre’s Origins
Excerpt from The Mummy by Jane Webb Loudon
“Some Words with a Mummy” by Edgar Allan Poe
“Lost in a Pyramid” by Louisa May Alcott
“Lot No. 249” by Sir Arthur Conan Doyle
Excerpt from Jewel of Seven Stars by Bram Stoker
Part II: The Weird
“The Vengeance of Nitocris” by Tennessee Williams
“Smith and the Pharaohs” by H. Rider Haggard
“The Dog-Eared God” by Frank Belknap Long
“Tarbis of the Lake” by E. Hoffmann Price
“The “Soul of Ra-Moses” by Frank Murray Reynolds
Part III: The Extraordinary and the Exotic
“The Wings of Horus” by Algernon Blackwood
“A Descent Into Egypt” by Algernon Blackwood
“The Lost Elixir” by George Griffith
“The Cat” by Sax Rohmer
“The Whispering Mummy” by Sax Rohmer
Notes for Further Reading