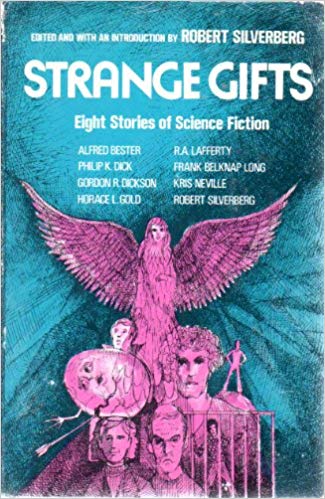 Robert Silverberg is known for his prolific career writing science fiction. Silverberg was also a masterful editor of science fiction collections. One of these SF collections from 1975 is Strange Gifts. In this themed anthology, each story presents a “gifted” character that disrupts the status quo. For example, in Philip K. Dick’s “The Golden Man,” mutants are hunted down by a Government agency. But some humans try to help the mutants survive. The Golden Man presents a huge problem for the Government because of his powers. Alfred Bester’s “Oddy and Id” follows the pattern with children with awesome powers. Silverberg’s own “To Be Continued” explores what it would be like to be able to live thousands of years. What problems would a vastly increased life-span present? The most surreal story in Strange Gifts is “Humpty Dumpty Had A Great Fall” where a child is able to tap into alternate dimensions. Kris Neville’s “Bettyann” explores what it would be like for an alien child to be raised as a human. All in all, I enjoyed these stories of strangeness. Perfect Summer reading material! GRADE: B+
TABLE OF CONTENTS:
Robert Silverberg. Introduction 11
Dick, Philip K. The golden man. (IF, April 1954) 13
Dickson, Gordon R. Danger-human! (Astounding Science Fiction, December 1957) 49
Lafferty, R. A. All the people. ( Galaxy Magazine, April 1961) 71
Bester, Alfred. Oddy and Id. (Astounding Science Fiction, August 1950) 84
Gold, H. L. The man with English (STAR SCIENCE FICTION STORIES, 1953) 102
Silverberg, Robert. To be continued. (Astounding Science Fiction, May 1956) 113
Long, Frank Belknap. Humpty Dumpty had a great fall. (Startling Stories, November 1948) 128
Neville, Kris. Bettyann. ( New Tales of Space and Time, 1951) 158