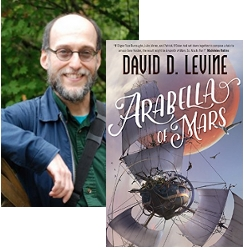 I’m not a big fan of steam-punk SF, but I’d read enough positive reviews of David D. Levine’s Arabella of Mars to order a copy (plus I liked the cover artwork by Stephan Martiniere). Levine creates a Mars of 1812. There is a British colony on Mars. Arabella, her older brother Michael, her father and mother, and her two younger sisters live in an uneasy association with Martian tribes. After an incident where Arabella is hurt, her mother (who hates Mars) insists on returning to London with her children. Arabellas’s father, knowing his wife’s dislike of the red planet, agrees but negotiates to keep Michael on Mars to help him operate the family plantation. His wife agrees and leaves for Earth. Yes, the scenes of “sailing” through Space in wooden ships seems a bit wacky (I found Levine’s explanations unconvincing). But if you suspend your skepticism, Arabella of Mars accelerates into an entertaining adventure novel. Arabella decides she has to return to Mars so she disguises herself as a teenage boy. The mysterious Captain of a Mars Trading Company ship, Diana, hires Arabella because of her skill with clockwork mechanisms. Yes, sometimes the action feels like C. S. Forester’s Hornblower books (or Patrick O’Brian’s Jack Aubrey and Stephen Maturin seafaring novels). Only set in Space between Earth and Mars. If you’re in the mood for a fun adventure, Arabella in Mars will take you on one. GRADE: B

13 thoughts on “ARABELLA OF MARS By David D. Levine”