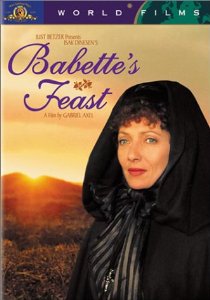 Babette’s Feast won the 1987 Academy Award for Best Foreign Language Film. It’s also the first Danish film to win an Academy Award. Basically, the story is straight-forward: an inspirational minister and his two beautiful daughters live in a rural Danish town in the 19th Century. The movie then shows what happens when the minister dies and his sect dwindles. The beautiful daughters, who had opportunities to live and marry, are now old and white-haired–and alone. Through a twist of fate, a French woman joins their small community. The French woman, Babette, shows the community what Real Life and real French cooking are like. I enjoyed this story of decisions made and opportunities lost. Many viewers will consider Babette’s Feast too slow, but its leisurely pace is part of its charm. GRADE: B