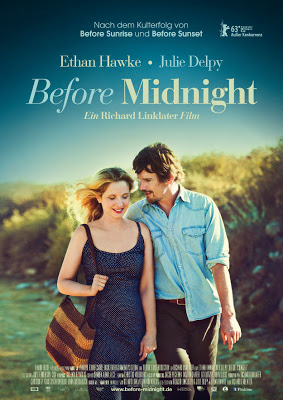 Before Midnight is the third movie following the relationship of Jesse (Ethan Hawke) and Celine (Julie Delpy). The first two movies, Before Sunrise (1995) and Before Sunset (2004), featured director Richard Linklater’s patented shooting style with long, uninterrupted scenes full of dialogue. In fact, if you’re not ready for movies where most of the film (about 90%) is dialogue, it comes as a shock. Whether you’re going to enjoy these movies depends a lot on whether you like the characters. Jesse is a writer with some narcissistic tendencies. Celine is a beautiful but moody French woman. As you might suspect, Jesse and Celine’s relationship has plenty of ups and downs. Spacing these movies about seven years apart allows for the audience to see the arc of the characters’ relationships. I found watching the latest installment, Before Midnight, like getting together with some old friends. However, [SPOILER ALERT!] if I were in bed with a half-naked woman (like Ethan Hawke is) I would NEVER start an argument and piss her off! [END OF SPOILER ALERT]. GRADE: B+

9 thoughts on “BEFORE MIDNIGHT”