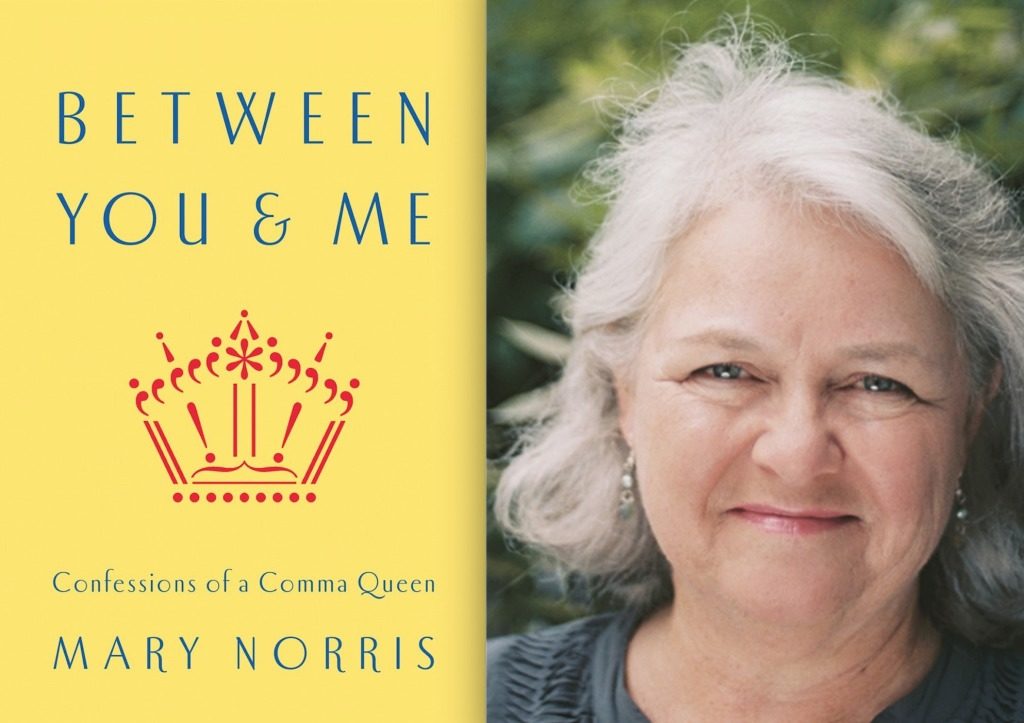 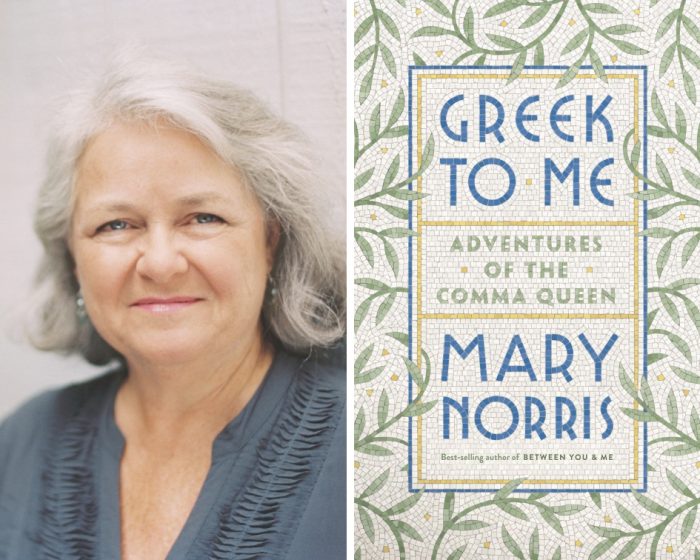 Mary Norris has worked for The New Yorker since 1978, mostly as a copywriter. Norris edited the work of John McPhee, George Saunders, Ian Frazier, Mark Singer, Emily Nussbaum, Jon Lee, Calvin Trillin, Karen Russell, Ben McGrath, and dozens more. In Between You and Me, Norris writes about her love of grammar and how she managed to score her dream job. In later chapters, Norris explores burning questions like who put the hyphen in Moby-Dick and why are there so many commas in so much of our writing.

The comma was invented by Aldo Manuzio, a Venice printer, in 1490. Maruzio was working on printing Greek classics and found that using a comma (in Greek, komma means “something cut off”–a segment) made the passages less confusing. Over time, Norris is convinced that people insert too many commas in much of their writing.

My favorite chapter is Chapter 7: A Dash, a Semicolon, and a Colon Walk into a Bar. Norris analyzes how Emily Dickinson used dashes in her poetry and how Henry James used colons and semi-colons so effectively. GRADE: A

In It’s Greek to Me, Mary Norris writes about her love affair with Greece and the Greek language. I found It’s Greek to Me less interesting and less compelling than Between You and Me.. Are you a fan of grammar? GRADE: B
TABLE OF CONTENTS TO BETWEEN YOU AND ME:
Introduction: Confession of a Comma Queen 1
Chapter 1 Spelling Is for Weirdos 15
Chapter 2 That Witch! 35
Chapter 3 The Problem of Heesh 57
Chapter 4 Between You and Me 77
Chapter 5 Comma Comma Comma Comma, Chameleon 92
Chapter 6 Who Put the Hyphen in Moby-Dick? 111
Chapter 7 A Dash, a Semicolon, and a Colon Walk into a Bar 131
Chapter 8 What’s Up with the Apostrophe? 147
Chapter 9 F∗ck This Sh∗t 157
Chapter 10 Ballad of a Pencil Junkie 169
Epilogue: The Million-Dollar Copy Editor 193
Acknowledgments 201
Notes 205
Appendix: Some Books I Have Found Particularly Helpful 213
Index 217
TABLE OF CONTENTS TO IT’S GREEK TO ME:
Invocation 1
Chapter 1 Alpha to Omega 19
Chapter 2 A Is for Athena 42
Chapter 3 Dead or Alive 66
Chapter 4 Demeter Dearest 97
Chapter 5 A Taste for Tragedy 122
Chapter 6 Swimming with Aphrodite 149
Chapter 7 Acropolis Now 176
Chapter 8 The Sea! The Sea! 201
Acknowledgments 223
Appendix The Greek Alphabet 227

34 thoughts on “BETWEEN YOU AND ME: CONFESSIONS OF A COMMA QUEEN and IT’S GREEK TO ME: ADVENTURES OF THE COMMA QUEEN By Mary Norris”