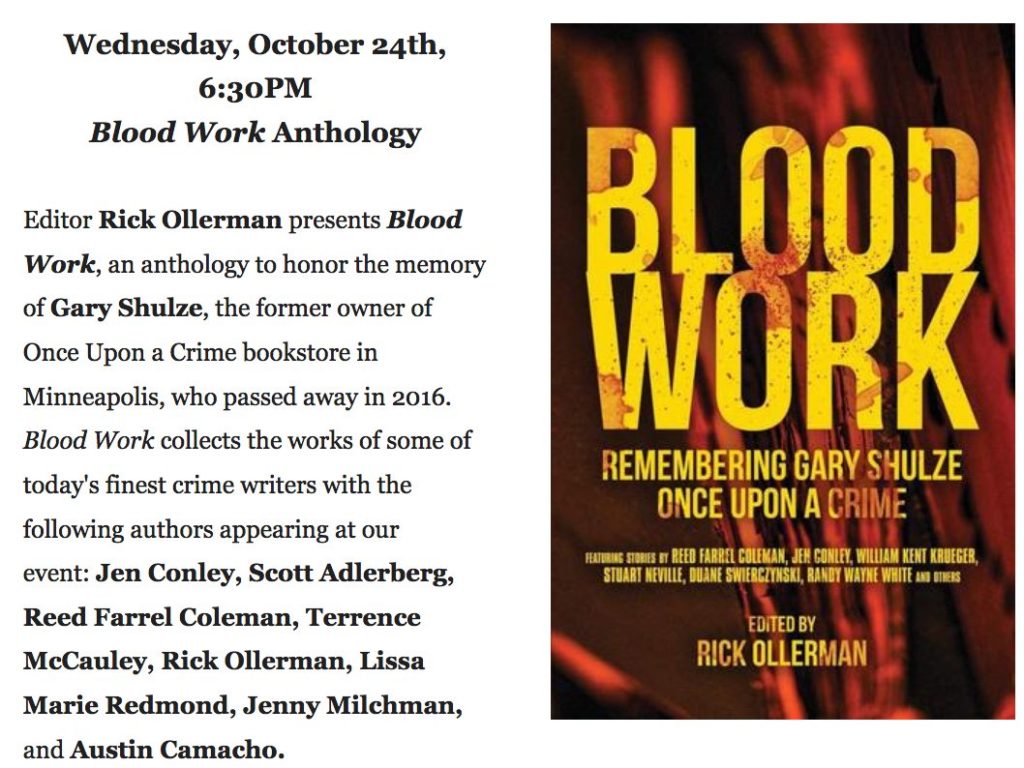 Rick Ollerman and an impressive group of writers have produced Blood Work, an anthology of crime and mystery stories in appreciation for Gary Shulze, owner of the ONCE UPON A CRIME bookstore in Minneapolis, Minnesota. Together with his wife, Pat, Gary helped dozens of writers by offering them a site for readings and promoting their books. When Gary died, the writers he helped decided to “give back” by producing this volume of short stories. The guidelines for the stories: they had to involve a book, or bookstore, or tuba (Gary played the tuba as part of a band that played concerts in the Twin Cities area).

In his Introduction, Rick Ollerman writes: “No one who is taking part in the writing or publishing of this book is making a penny from it. This is as true a labor of love as we can make it, with all the proceeds going to a charity that Pat says saved Gary’s life many times over. The beneficiary of this work is the Memorial Blood Centers of St. Paul, Minnesota…” This is the giving season so consider buying this book, enjoying the stories, and supporting the Memorial Blood Centers. I admire Rick and the other writers who contributed to this special project. Highly recommended! GRADE: A
TABLE OF CONTENTS:
Introduction by Rick Ollerman 1
Lush–Duane Swierczynski 5
Undeliverable–Libby Fischer Hellmann 17
Seven Fiancees–David Housewright 29
House on the Mound–Randy Wayne White 43
Just Another Cold Case–William Kent Krueger
Ticket to Hell–Kristi Belcamino
Message from a Dead Man–Michael Allan Mallory 75
Melanie–Jen Conley
Faith–Stuart Neville
Tommy the Turtle and the Tuba–Michael A. Black
The Adventure of the First Problem–Jess Lourey 127
The Stolen Arm–Scott Adlerberg 147
The Shoe Tack–Reed Farrel Coleman 159
Return–Eric Beetner 167
Malta–Terrence McCauley 175
Unsafe–Lois Greiman 191
At the Laundromat–Nick Petrie 205
The Secret Adversary–Jessie Chandler 217
I’m With It: A Love Story–Gary R. Bush 231
The Case of the Missing Tuba–Michael Stanley 251
Tide Kings–Rick Ollerman 259
An Orchestral Caper–Don Bruns 277
The Last Customer–John Gaspard 293
The Dead Man Blues–Lissa Marie Redmond 303
The Truck Stop–Jenny Milchman 321
Backlit–Michael Bracken 343
The Funkafied Man–Gary Phillips 363
Moose Tracks–Dave Case 377
One for the Books–Austin Camacho 391
Subtle Notes–Case Younggren 397

15 thoughts on “BLOOD WORK: REMEMBERING GARY SHULZE ONCE UPON A CRIME Edited by Rick Ollerman”