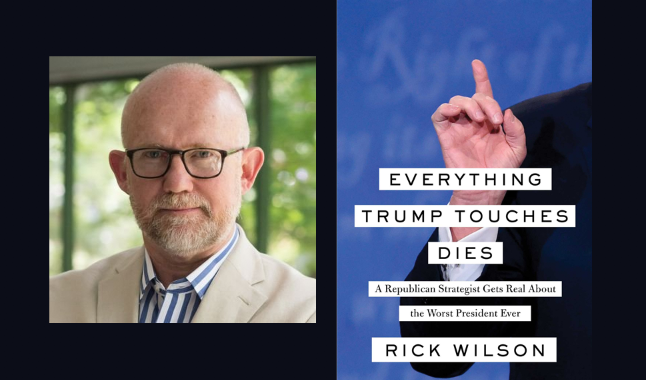 “Now the disease of Trumpism has consumed the Republican Party and put the entire conservative movement at risk. It has been hijacked by a bellowing, statist billionaire with poor impulse control and a profoundly superficial understanding of the world. The blazing, white-hot embrace of actual, honest-to-God stupidity has been as contagious as small pox and as fatal as Ebola.” (p.6)

Rick Wilson’s Everything Trump Touches Dies: A Republican Strategist Gets Real About the Worst President Ever doesn’t pull any punches. As a political operative for decades, Rick Wilson knows the political score. He shows how the Republican Party–chiefly Reince Priebus, Paul Ryan, Roger Ailes of FOX New–failed to stop Trump early in the 2016 campaign. Wilson provides the flawed logic that eliminated all of Trump’s Republican rivals with the help of donors and FOX News stacking the deck in favor of Trump.

Wilson also gives a penetrating analysis of the strong Evangelical support of Trump: “Being a goddamned degenerate pussy-grabber with a lifetime of adultery, venality, and dishonesty is not, to my knowledge, one of the core tenets of the Christian faith. I can’t find it in either the Old or New Testament, and I’m not sure which book of the Apocrypha the ‘pussy-grabber’ exception comes in, but as noted earlier, I’m no biblical scholar.” (p 63)

29 thoughts on “EVERYTHING TRUMP TOUCHES DIES By Rick Wilson”