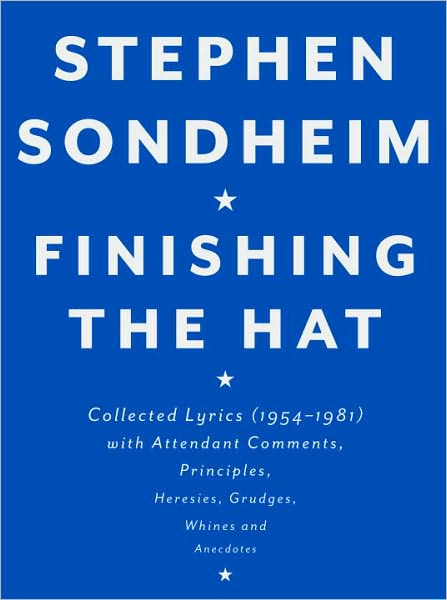 Bruce Taylor once charged Stephen Sondheim with the death of the Broadway musical. I don’t know about that, but I do know that Sondheim wrote one of my favorite songs: “Send in the Clowns” from A Little Night Music. Finishing the Hat: Collected Lyrics (1954-1981) with Attendant Comments, Principles, Heresies, Grudges, Whines and Anecdotes is both Sondheim’s quirky memoir and a textbook to writing songs for Broadway musicals. If you’re at all interested in how West Side Story, Gypsy, A Funny Thing Happened on the Way to the Forum, Company, A Little Night Music, and Sweeny Todd were made along with plenty of background information on the principals in the productions, you’re going to love this book.

I found Sondheim’s approach opinionated and unique. He takes you behind the curtain to see how producers, directors, stars, and even the guys who write “the Book” operate. I found Finishing the Hat fascinating. Love Sondheim or hate him, he certainly has a lot of acerbic insights about the craft of song writing and the state of musical theater in America. GRADE: A