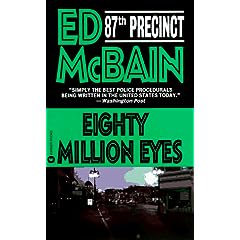 Ed McBain wrote 54 87th Precinct novels and I’ve read 40 of them. I’m slowly working my way through the last handful. Eighty Million Eyes was first published in 1966, the 21st book in the series. Some of the early 87th Precinct novels are dated, but Eighty Million Eyes only has a few jarring dated references. A comedian collapses during his show on prime-time TV. Forty million viewers (with 80 million eyes) witness what is later discovered to be a murder. The comedian was poisoned. And, as readers of this series know, a second case about a psycho stalker intersects the primary case. McBain slyly includes a producer talking to a director about changing a script. There’s plenty of mocking of writers in cynical Hollywood fashion. Very funny and very true based on McBain’s own dealings with movie and TV producers. If you haven’t read any 87th Precinct books, Eighty Million Eyes is a good place to jump in. No previous knowledge of the series is necessary to follow the action in this fine police procedural.