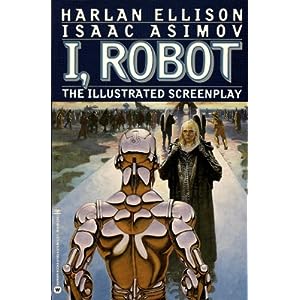 Back in the 1970s, Hollywood expressed interest in turning Isaac Asimov’s classic SF novel, I, Robot into a movie. Things didn’t quite work out, although I, Robot later appeared as 2004 science-fiction action film directed by Alex Proyas with little (other than the title) in common with Asimov’s novel. I, Robot: The Illustrated Screenplay features Harlan Ellison’s screenplay which does embody some of the novel’s look and feel. The screenplay remains unfilmed. Ellison and Asimov agreed to have the screenplay serialized in Isaac Asimov’s Science Fiction Magazine. This hardcover edition was published in 1987. If you’re an admirer of Asimov’s I, Robot and respect Harlan Ellison’s talents at writing scripts, this book should hold your attention.