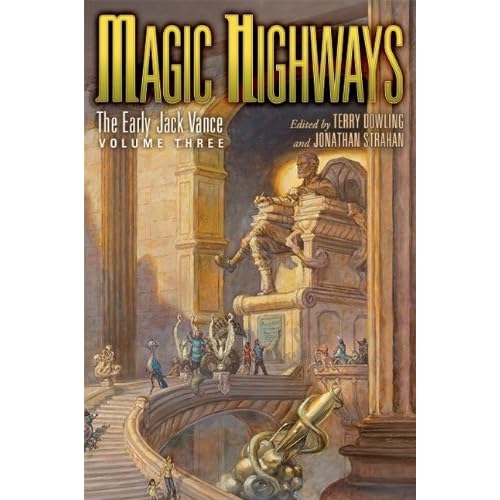 The past few FFBs, I’ve been reviewing faux-Jack Vance novels from Matthew Hughes (the best practitioner!) to Ray Aldridge to L. Warren Douglas. But this week, I’m reviewing the Real Deal: Magic Highways: The Early Jack Vance, Volume Three. Most of these stories were published in the 1940s and 1950s when Jack Vance was learning his craft. I’m a huge Jack Vance fan, yet half of the 16 stories in this wonderful just published collection were new to me. Subterranean Press and editors Terry Dowling and Jonathan Strahan should be commended on publishing these collections of Jack Vance’s early work. The glimmers of Vance’s genius appear on every page!
TABLE OF CONTENTS
Phalid’s Fate
Planet of the Black Dust
Ultimate Quest
Men of the Ten Books
The Planet Machine
Dover Spargill’s Ghastly Floater
Winner Lose All
Sabotage on Sulfur Planet
The House Lords
Sanatoris Short-cut
The Unspeakable McInch
The Sub-Standard Sardines
The Howling Bounders
The King of Thieves
The Spa of the Stars
To B or Not to C or to D