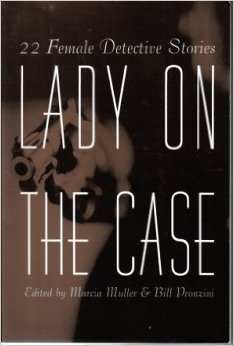 The original Lady on the Case was published in 1988. I have the Barnes & Noble edition that was published in 2000. Lady on the Case: 22 Female Detective Stories shows the evolution of the female detective from the gifted amateur to the professional detective. Of course, Agatha Christie’s Miss Marple is here, so are Sue Grafton’s Kinsey Millhone and Sara Paretsky’s V. I. Warshawski. I enjoyed the compete Miss Hildegarde Withers novel (she’s a Miss Marple clone but a good one). Inexpensive copies of this excellent anthology can be found online for a pittance. You’ll find over 500 pages of entertaining writing in Lady on the Case.
TABLE OF CONTENTS
Introduction
“The Murder at Troyte’s Hill” by C. L. Pirkis
“The Man in the Inverness Cape” by Baroness Orczy
“Death in the Sun” by G.D. H. and Margaret Cole
“The Second Bullet” by Anna Katharine Green
“The Stripper” by Anthony Boucher
“The Claret Stick” Mignon Eberhart
“The Four Suspects” by Agatha Christie
“The Broken Men” by Marcia Muller
“The Invisible Intruder” by Edward D. Hoch
“A Date in Helsinki” Patricia McGerr
“The Dancing Detective” by Cornell Woolrich
“Lucky Penny” by Linda Barnes
“The Fuzzy Things” by D. B. Olsen
“Coyote and Quarter-Moon” by Bill Pronzini & Jeffrey Wallmann
“At the Old Swimming Hole” by Sara Paretsky
“Mom Sheds a Tear” James Yaffe
“Dairy Bell” by Gladys Mitchell
“Solo Job” by Paul Gallico
“Not Before My Morning Coffee” by Susan Dunlap
“Mrs. Norris Observes” by Dorothy Salisbury Davis
“The Parker Shotgun” by Sue Grafton
“Murder on Wheels: A Novel” by Stuart Palmer