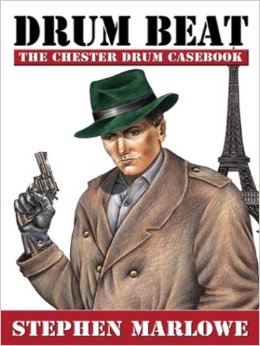 Yes, this is the third FFB in a row featuring Milton Lesser’s work. Lesser legally changed his name to Stephen Marlowe. In the past two FFBs, I reviewed Milton Lesser’s science fiction stories. After a decade of writing SF, Lesser switched to crime and suspense in the 1960s writing under the Stephen Marlowe pseudonym that was to become his name. Marlowe’s Chester Drum series featured a unique private eye. Where many private eyes were based in a single city–Michael Shayne in Miami, Philip Marlowe in L.A., Sam Spade in San Francisco–Marlowe gave Drum an international beat. Cases in France, Spain, and Italy are included in this book. Bill Pronzini’s detailed Introduction explores the Stephen Marlowe oeuvre. I’d never seen this book before because it was published by Five Star, a publisher who specialized in selling its books to libraries. But Drum Beat is available at the usual Internet sources at reasonable prices. This collection is well worth it especially because it includes what Marlowe considered his best Chester Drum novel, Dominique.
TABLE OF CONTENTS:
Prelude: A Fast Drumroll by Bill Pronzini
“Drum Beat”
“Baby Sister”
Chester Drum Takes Over
Wanted–Dead and Alive
A Place to Visit
Drum Beat–Dominique