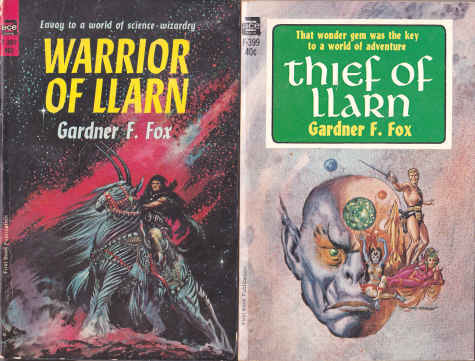 Back in the 1960s, I was transitioning from comic books to paperbacks. At that time, my favorite publisher was ACE Books because they seemingly brought out cool books every month. Warrior of Llarn caught my eye because the author was Gardner F. Fox. Could this be the same Gardner F. Fox that wrote for DC Comics? Yes, it was. Fox’s story of Alan Morgan, an Earthman transported to a planet light-years away, had many of the story elements I loved when Fox was writing stories for DC Comics about Adam Strange. Alan Morgan encounters an ancient world on Llarn; a world ruined by a nuclear war. The survivors mutated in different ways. Morgan found himself serving a being who sent him on quests to find rare artifacts. Morgan also falls in love and joins a revolution to unseat a corrupt warrior. In the sequel to Warrior of Llarn, Fox transforms Alan Morgan into a master thief who has to steal a rare gem with incredible powers. Secret technologies amid the ruins of fabulous cities, cunning adversaries, and a clever conclusion make Thief of Llarn one of the best “Sword & Planet” stories ever. If you haven’t read these entertaining adventures, you’re missing a lot of fun.

14 thoughts on “FORGOTTEN BOOKS #275: WARRIOR OF LLARN/THIEF OF LLARN By Gardner F. Fox”