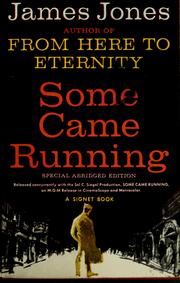 Yes, Some Came Running is a 1,266-page book. It took James Jones six years to write it after the success of his first novel, From Here to Eternity. Sadly, Some Came Running was a financial flop. It’s lack of monetary success forced James Jones into writing a screenplay for The Longest Day in order to pay his bills. I didn’t know about Some Came Running until I read Lee Sandlin’s review in the Wall Street Journal. You can check it out here.

Dave Hirsh returns from World War II with what we know today is PTSD. Hirsh had some success as a writer before the war and tries to get back to writing. But he flies into rages, he chases women, and he drinks like a fish. Dave’s brother, Frank, is trying to build a financial empire. The brothers don’t get along and fight continually. The post-WWII world is changing and everyone is struggling to adapt. It’s been a long time since I’ve read a 1000+ page book, but I enjoyed this one. James Jones could have written another 5000 pages about these characters…and I would have read them. Jones has that kind of narrative power. I was able to find an unabridged copy of Some Came Running online for $12. The unabridged edition has never been reprinted. But it’s worth seeking out.

21 thoughts on “FORGOTTEN BOOKS #309: SOME CAME RUNNING By James Jones”