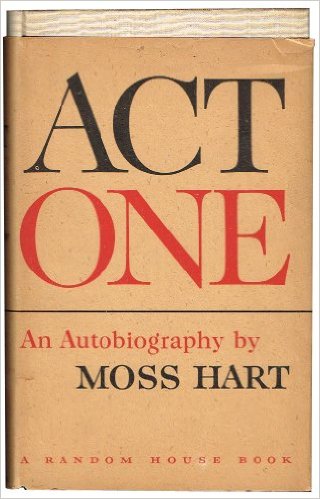 Back in 1959, Broadway veteran Moss Hart published Act One his story of how he got started in show business. Moss Hart’s family was dysfunctional and poor. His chances of making it to Broadway and having any impact on the 70 plays that were being performed at that time was slight. But Moss Hart’s story of his drive and passion to make it to Broadway is inspiring and funny. Hart’s strategy of spending summers conducting theater camps leads to mind-boggling complications. The story of how Moss Hart’s first play, Once in a Lifetime, goes through the creative process with George S. Kaufmann directing makes fascinating reading. Hart shows how scripts are written and revised. If you have any interest in Broadway productions and how a play is developed, Act One reveals all the nitty-gritty details. I found Act One to be a marvelous book!

36 thoughts on “FORGOTTEN BOOKS #355: ACT ONE: AN AUTOBIOGRAPHY by Moss Hart”