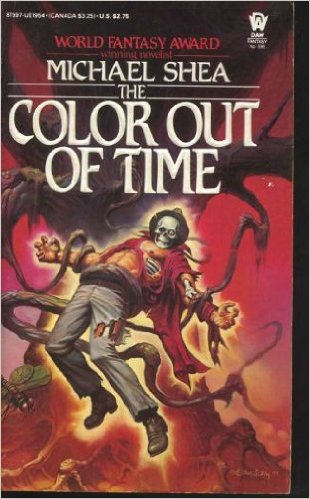 H. P. Lovecraft’s “The Colour Out of Space” is one of my favorite Lovecraft tales (Lovecraft stated “The Colour Out of Space” was his favorite story). A meteorite falls in a field near a farm outside of Arkham, Massachusetts. Scientists investigate the weirdly colored goo but are baffled by its alien properties. Back on the farm, the crops grow in a wild fashion. But when people try to eat the vegetables, a terrible taste renders them uneatable. The farmer and his family degenerate from drinking the well water where the “colour” resides (sounds like a precursor to Flint, Michigan). Lovecraft ratchets up the dread with each page as the alien presence works its lethal effects. Michael Shea updates Lovecraft’s classic story by setting it in 1984. Two scientists find the “color” is active again and growing stronger. The Park rangers are the first to fall under the color’s creepy effects. Then even more dreadful events occur. If you’re a fan of H. P. Lovecraft, you’ll enjoy this updated version of a menacing alien encounter.

15 thoughts on “FORGOTTEN BOOKS #368: COLOR OUT OF TIME By Michael Shea”