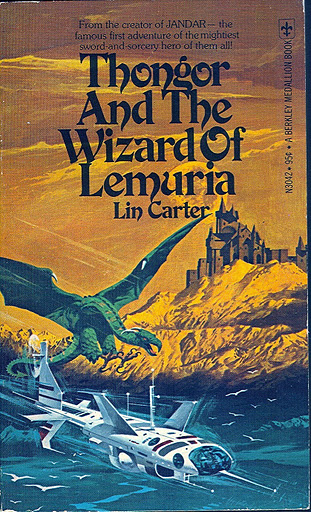 Ramble House just published The Sword of Thongor so the cover artwork isn’t available online yet. In its place, I’m providing one of my favorite Thongor covers instead. Thongor was created by Lin Carter as a Conan clone. If you’re a fan of Robert E. Howard’s barbarian, then you’ll feel right at home with the Thongor series. Like Conan, Thongor travels around getting in trouble. Plenty of sword fights and action propel the books. No doubt Robert E. Howard was the more talented writer, but Lin Carter manages to capture some of the Conan magic in his Thongor series. Robert M. Price is the executor of Lin Carter’s estate. He’s a fan of the Thongor series and decided to write a sequel. Richard A. Lupoff provides an informative Introduction. If you’re a fan of Sword & Sorcery novels, The Sword of Thongor will entertain you. GRADE: B
THONGOR OF VALKARTH SERIES
1. Young Thongor, by Lin Carter, Robert M. Price, and Adrian Cole (Wildside Press, 2012) (ISBN 978-1-4344-4101-0)
2. The Wizard of Lemuria (1965; revised/expanded as Thongor and The Wizard of Lemuria (1969)). In his introduction to the revised edition, “A Word from the Author”, Carter reveals that the revisions consist of restoring certain passages cut by the editor from the first edition, conforming certain portions of the book to details described in later books of the series, and adding a few thousand words of new material.
3. Thongor of Lemuria (1966; revised/expanded as Thongor and the Dragon City (1970))
4. Thongor Against the Gods (1967)
5. Thongor in the City of Magicians (1968)
6. Thongor at the End of Time (1968)
7. Thongor Fights the Pirates of Tarakus (1970)

11 thoughts on “FORGOTTEN BOOKS #397: THE SWORD OF THONGOR By Robert M. Price”