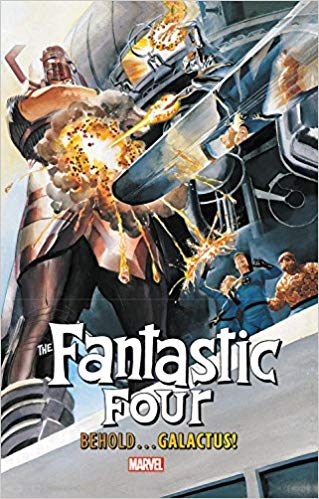 For something completely different for FFB, you might want to try FANTASTIC FOUR: BEHOLD…GALACTUS!. This oversized book weighs 12.6 pounds! Its dimensions are 14.5 x 2 x 22 inches! And, yes, it costs $50! Worth every penny!

In this classic series of MARVEL comics, the Fantastic Four take on Galactus in a supersized volume.! Stan Lee and illustrator Jack Kirby introduced the Galactic World-Eater and his enigmatic herald, the Silver Surfer back in 1966 (in The Fantastic Four #48). This sequence of Galactus and the Silver Surfer about to consume the Earth is one of the greatest comic book sagas ever told! In addition to that iconic story, Stan Lee and Jack Kirby brought Galacus back, but what does Galactus want this time? As the advertising for this book says; “The answer lies in the Microverse! John Buscema’s powerful pencils illustrate the arrival of new herald, Gabriel the Air-Walker, signaling doom for the human race! Then, John Byrne takes over as Terrax leads the Devourer back to Earth – and the entire Marvel Universe pitches in to help the FF save the planet from becoming his next meal! With Kirby, Buscema, and Byrne art showcased on enormous pages, Galactus has never looked bigger – or better!”