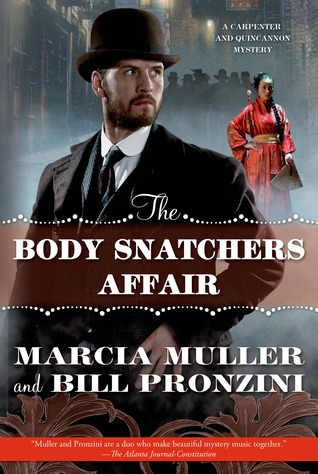 This third volume of the Carpenter and Quincannon historical mystery series is set in 1890’s San Francisco. I assume Marcia Muller wrote the chapters labeled “Sabina” and Bill Pronzini wrote the chapters labeled “Quincannon.” Sabina Carpenter is a woman private detective who once worked for Pinkerton. John Quincannon was once a Secret Service agent. Together, Carpenter and Quincannon formed a partnership where their individual talents as detectives help to solve their cases. In The Body Snatchers Affair, two bodies go missing and Sabina and Quincannon are hired to find them. From the mansions of the Bay Area to the squalid opium dens of Chinatown, the parallel investigations produce surprising results. If you’re in the mood for a light-hearted historical series written by two consummate mystery writers, the Carpenter and Quincannon series delivers.