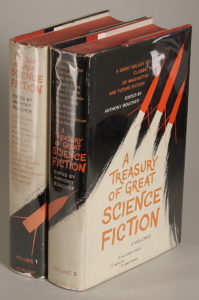 Readers of a certain age will remember A Treasury of Great Science Fiction. It was everywhere in the Sixties and Seventies. Published in 1959, the two-volume set became a mainstay of the Science Fiction Book Club. For a lot of SF readers, this was the anthology that got them started. I’ve seen sets of A Treasury of Great Science Fiction for decades. But once the 1990s arrived, Anthony Boucher’s SF anthology became more scarce. It’s been a decade since I’ve seen a set in a thrift store or used bookstore. A Treasury of Great Science Ficiton offers four full-length novels, 12 novelettes, and 8 short stories in two 500+ page volumes. I’d call that a bargain! GRADE: B+
TABLE OF CONTENTS:
VOLUME I
RE-BIRTH by John Wyndham
THE SHAPE OF THINGS THAT CAME by Richard Deming
PILLAR OF FIRE by Ray Bradbury
WALDO by Robert A. Heinlein
THE FATHER-THING by Philip K. Dick
THE CHILDREN’S HOUR by Henry Kuttner & C. L. Moore
GOMEZ by C. M. Kornbluth
THE (WIDGET), THE (WADGET), AND BOFF by Theodore Sturgeon
SANDRA by George P. Elliott
BEYOND SPACE AND TIME by Joel Townsley Rodgers
THE MARTIAN CROWN JEWELS by Poul Anderson
THE WEAPON SHOPS OF ISHER by A. E. van Vogt
VOLUME II
BRAIN WAVE by Poul Anderson
BULLARD REFLECTS by Malcolm Jameson
THE LOST YEARS by Oscar Lewis
DEAD CENTER by Judith Merril
LOST ART by George O. Smith
THE OTHER SIDE OF THE SKY by Arthur C. Clarke
THE MAN WHO SOLD THE MOON by Robert A. Heinlein
MAGIC CITY by Nelson S. Bond
THE MORNING OF THE DAY THEY DID IT by E. B. White
PIGGY BANK by Henry Kuttner
LETTERS FROM LAURA by Mildred Clingerman
THE STARS MY DESTINATION by Alfred Bester