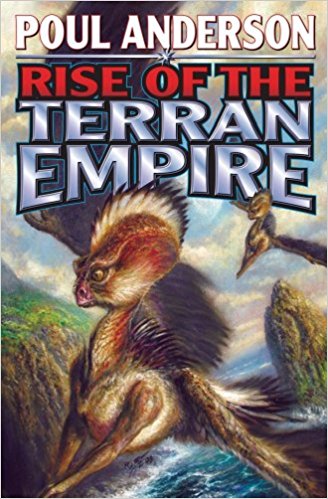 Rise of the Terran Empire is the third omnibus volume in BAEN Books’s “The Technic Civilization Saga.” The confederation of traders that kept order is breaking down. Poul Anderson shows how the Terran Empire emerges from the breakup of the old order. If you’re looking for that “Sense of Wonder” in Science Fiction, this volume has it in spades. Anderson also manages to create credible aliens in these stories, too.
TABLE OF CONTENTS:
“Descent into Empire” By Hank Davis vii
Mirkheim 1
“Wingless” 293
“Rescue on Avalon” 307
“The Star Plunderer” 325
“Sargasso of Lost Starships” 363
The People of the Wind 437
“Chronology of Technic Civilization” By Sandra Miesel 663

20 thoughts on “FORGOTTEN BOOKS #457: RISE OF THE TERRAN EMPIRE By Poul Anderson”