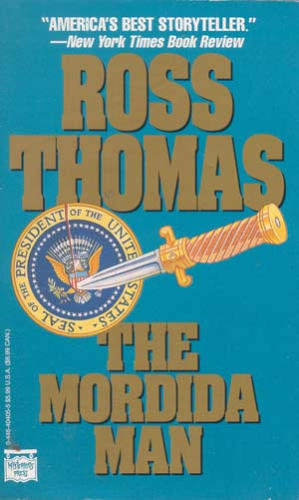 Ross Thomas is better known for his classic Chinaman’s Chance and The Eighth Dwarf, but in 1981 he published The Mordida Man where he takes the political caper to a new level. The President’s brother, Bingo McKay, has been kidnapped. The President receives Bingo’s ear wrapped in a Gucci box. Clearly, this is job for “The Mordida Man,” Chubb Dunjee. “Mordida” means bribery in Spanish and Dunjee has to spread the money around to mount a rescue of the President’s brother. However, like most Ross Thomas novels, nothing is exactly what it seems. There’s plenty of suspense and intricate plotting in The Mordida Man. It’s astonishing that an author who won the Edgar for Best First Novel in 1967 for The Cold War Swap and another Edgar for Best Novel in 1985 for Briarpatch is out-of-print and nearly forgotten.

8 thoughts on “FORGOTTEN BOOKS #7: THE MORDIDA MAN By Ross Thomas”