Sorry for the dinky graphic. James Warner Bellah wrote the novelization of his screenplay (with Willis Goldbeck, based on a story by Dorothy M. Johnson) for The Man Who Shot Liberty Valance in 1962. There were a couple of paperback editions and then…nothing. Talk about being forgotten! James Warner Bellah wrote for The Saturday Evening Post and published over a dozen novels. He was also a successful Hollywood screenwriter. Bellah wrote the screenplays for The Sea Chase (1955), Thunder of Drums (1961), and X-15 (1961).

James Warner Bellah’s novels Dancing Lady (1932) and The Command (1954) were made into a movies. The movie Fort Apache (1948) was based on Bellah’s short story “Massacre” (later issued as a book), and She Wore a Yellow Ribbon (1949) was based on “War Party.” He both wrote the novel and later, the screenplay based on it, Sergeant Rutledge (1960) . Bellah also appeared in bit parts and as an extra in movies including The Man Behind the Gun (1952).

I loved the movie version of The Man Who Shot Liberty Valance when I saw it as a kid. I immediately bought the Gene Pitney song (written by Burt Bacharach and Hal David) and read James Warner Bellah’s book at the Library. Those memories have stayed with me all these years. 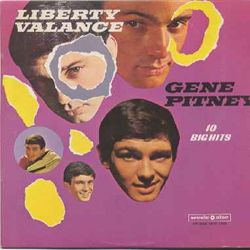