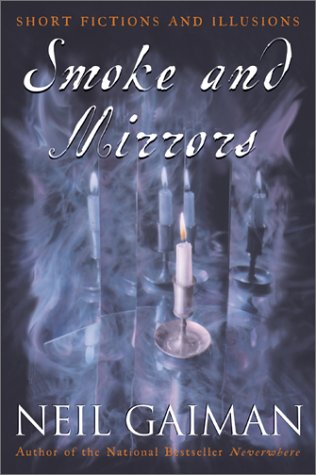 Neil Gaiman is one of my favorite writers and this early collection from 1998 shows off his talents before he hit the Big Time. Gaiman is a crafty writer who dabbles in fantasy and science fiction. My favorite stories in this collection are based on Gaiman’s version of H. P. Lovecarft’s Cthulhu Mythos: “Shoggoth’s Old Peculiar” and “Only the End of the World Again.” The range of stories here span Hollywood pastiches to apocalyptic tales. I was surprised that this book was published in hardcover by Avon Books (remember them?). If you’re in the mood for some delicious fiction, you’ll find it here.
TABLE OF CONTENTS:
Reading the Entrails – a Rondel about the pleasures and perils of fortune-telling
The Wedding Present – a story included in the introduction
Chivalry – a story about the Holy Grail written for an anthology by Marty Greenberg
Nicholas Was… – a very short story (100 words) used for a Christmas card
The Price – on the subject of cats and angels
Troll Bridge – an adult retelling of The Three Billy Goats Gruff written for the anthology Snow White, Blood Red by Ellen Datlow and Terri Windling
Don’t Ask Jack – inspired by a demonic jack-in-the-box sculpture by Lisa Snellings
The Goldfish Pool and Other Stories
Eaten (Scenes from a Moving picture) †
The White Road – a narrative poem retelling some old English folktales
Queen of Knives (for Eric Stern’s opera of the same name see Queen of Knives) – a narrative poem about stage magic
The Facts in the Case of the Departure of Miss Finch †‡
Changes – written for Lisa Tuttle about gender reflection
The Daughter of Owls – written in the style of John Aubrey
Shoggoth’s Old Peculiar
Virus – written for the anthology Digital Dreams by David Barrett[disambiguation needed] about computer fiction
Looking for the Girl – commissioned by Penthouse for their 20th anniversary issue
Only the End of the World Again
Bay Wolf – a story poem retelling Beowulf as a futuristic episode of “Baywatch”
Fifteen Painted Cards from a Vampire Tarot †
We Can Get Them For You Wholesale
One Life, Furnished in Early Moorcock – written for an anthology of Elric stories by Michael Moorcock
Cold Colors – inspired by computers and black magic
The Sweeper of Dreams – inspired by a Lisa Snellings statue
Foreign Parts
Vampire Sestina – a poem originally published in Fantasy Tales and later reprinted in the Mammoth Book of Vampires by Stephen Jones
Mouse – a short story inspired by Raymond Carver and written for Touch Wood, edited by Pete Crowther
The Sea Change
How Do You Think It Feels? †‡
When We Went to See the End of the World by Dawnie Morningside, age 11¼
Desert Wind – written for Robin Anders of Boiled in Lead to accompany one of his tracks
Tastings – included in the anthology of erotic fantasy stories, Sirens by Ellen Datlow and Terri Windling
In the End †*
Babycakes – written to include in a benefit for PETA
Murder Mysteries – a detective story written for the anthology Midnight Graffiti by Jessie Horsting
Snow, Glass, Apples

9 thoughts on “FORGOTTEN BOOKS #286: SMOKE AND MIRRORS By Neil Gaiman”