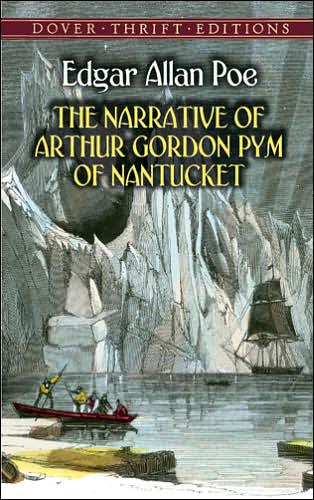 One of the highlights of the Indianapolis BOUCHERCON was the panel on Edgar Allan Poe. Mike Connelly, Sue Grafton, Peter Lovesey, John Lutz, and Sara Paretsky delighted the SRO audience with their insights on Poe. And, immediately after hearing their incisive commentary, I wanted to reread some Poe. I think it was Sara Paretsky who mentioned the special aspects of Poe’s only novel, The Narrative of Arthur Gordon Pym of Nantucket. I reread it and rediscovered the haunting story that influenced H. P. Lovecraft’s “Call of Cthulhu.” If you haven’t read The Narrative of Arthur Gordon Pym of Nantucket be prepared to be creeped out. Poe throws in horror, madness, and high adventure to create his own special blend of weird fiction. What better way is there to celebrate Poe’s 200th Birthday than to read one of his forgotten works.

12 thoughts on “FORGOTTEN BOOKS #40: THE NARRATIVE OF ARTHUR GORDON PYM OF NANTUCKET By Edgar Allan Poe”