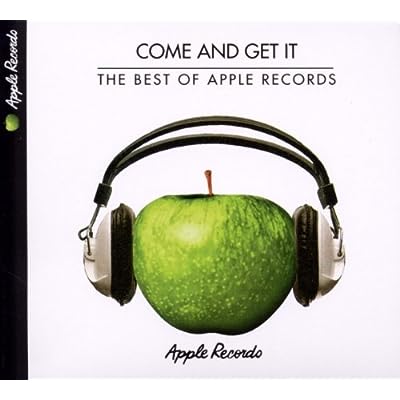 You could buy the complete Apple Records catalog on iTunes or you could buy this bargain CD of some of the best songs Apple ever released. I’m including the descriptions of the 21 tracks on this great anthology. If you’re a fan of Apple Records, this is a must-buy!
TRACK DETAILS FOR COME AND GET IT: THE BEST OF APPLE RECORDS:
1 Those Were The Days / Mary Hopkin
The multi-million selling debut 45 by Mary Hopkin was UK No. 1 for six weeks in 1968 and was produced by Paul McCartney, who discovered this 1920s Russian folk song in a London night club.

2 Carolina In My Mind / James Taylor
Taken from his self-titled debut album, this is the original version of ‘Carolina In My Mind’, cut in London in 1968. Issued as a US single, it features Paul McCartney on bass and George Harrison on backing vocals.

3 Maybe Tomorrow / The Iveys
The Iveys were brought to Apple by former Beatles roadie Mal Evans and ‘Maybe Tomorrow’ was a hit in Holland and a minor hit in the US, before the band changed its name to Badfinger.

5 King Of Fuh / Brute Force
Brute Force is a New York songwriter and this single was championed by John Lennon and George Harrison, but ‘Fuh’ rhymes with ‘Uh’, and ‘the Fuh king’ was therefore banned back in 1969.

7 Goodbye / Mary Hopkin
Mary’s hugely successful follow-up to ‘Those Were The Days’ was written by Paul McCartney, and features Paul providing his own thigh-slapping percussion throughout.

10 Golden Slumbers-Carry That Weight / Trash
A powerful interpretation of two songs from The Beatles’ Abbey Road, recorded by Trash, a heavy Scottish group that came to Apple via their producer, former Shadows drummer Tony Meehan.

11 Give Peace A Chance / Hot Chocolate Band
This completely re-worded British reggae version of John Lennon’s peace anthem was brought to Apple in a one-off deal by the band that became hugely popular in the Seventies with a string of classic disco hits.

12 Come And Get It / Badfinger
Written and produced by Paul McCartney for The Magic Christian film starring Peter Sellers and Ringo Starr, ‘Come And Get It’ was a massive worldwide hit and the first record issued by The Iveys under their new name of Badfinger.

13 Ain’t That Cute / Doris Troy
Soul singer-songwriter Doris Troy had scored hits before coming to Apple in 1969, and she and George Harrison wrote ‘Ain’t That Cute’ from scratch in the studio — the first time George had ever written a song that way.

14 My Sweet Lord / Billy Preston
George Harrison produced this soulful, gospel version of his most famous solo song, which he gave to Billy Preston before he had recorded it and released it himself.

15 Try Some Buy Some / Ronnie Spector
Ronnie Spector, one-time Ronette and former wife of legendary producer Phil, recorded this George Harrison original in 1971. George later re-cut it himself for Living In The Material World, using the exact same backing as Ronnie’s single.

17 We’re On Our Way / Chris Hodge
In 1972, Chris Hodge, a young British pop singer with a fascination for UFOs, caught the attention of Ringo Starr who signed Chris to Apple. ‘We’re On Our Way’ was recorded at Apple’s own studio in the basement of 3 Savile Row, London, and was a hit in America.

18 Saturday Nite Special / The Sundown Playboys
‘Saturday Nite Special’ is a lover’s lament sung in Cajun French by this cross-generational collective from Louisiana, USA, who came to Apple when their teenage accordionist sent in the song on a whim.

19 God Save Us / Bill Elliot & The Elastic Oz Band
John Lennon and Yoko Ono wrote this fundraiser for the defense in the famous Oz Obscenity Trial of 1971 and produced it too with Mal Evans and Phil Spector. Vocalist Bill Elliot later signed to George Harrison’s Dark Horse label.

21 Day After Day / Badfinger
The band’s third single for Apple was produced by George Harrison, who duetted with the band’s Pete Ham on the slide guitar solo. It went UK Top 10 in 1972, and peaked at No. 4 Billboard in the US, in the same week that Nilsson’s cover of Badfinger’s ‘Without You’ was at No. 1.

26 thoughts on “FORGOTTEN MUSIC #11: COME AND GET IT: THE BEST OF APPLE RECORDS”