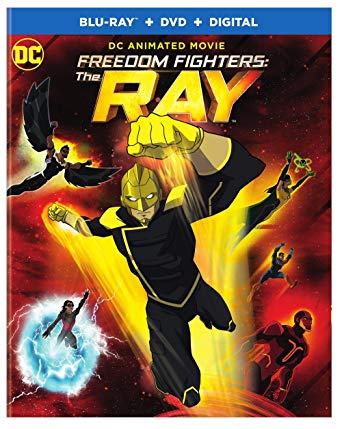 Imagine that Germany and Japan won World War II and are crushing the Resistance in the United States. That’s the premise of Freedom Fighters: The Ray. This Alternative Earth is called Earth-X. A band of meta-humans including The Ray fight the Nazis and support the Resistance. When The Ray is wounded during a fight with Nazi meta-humans, he’s sent to our Earth. The Ray passes his powers over to 22-year-old civil servant, Ray Terrill. Ray Terrill finds having superpowers both fun and scary.

With the help of The Flash and Green Arrow, The Ray learns how to master his powers. But Big Decisions–in Ray Terrill’s personal and superhero life–loom large. I’m a fan of these DC Animated movies. If you’re in the mood for a adventure in Infinite Earths, give Freedom Fighters: The Ray a try. GRADE: B+