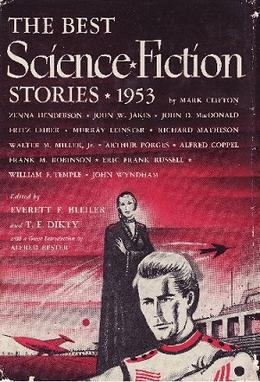 The 1953 anthology of The Year’s Best Science Fiction Stories demonstrates the increasing diversity of science fiction from that era. Zenna Henderson makes her first appearance with “Ararat.” John Jakes, who would later find fame writing the historical Kent Family Chronicles, explores the drama of “Machine.” John D. MacDonald, who would be best remembered for the Travis McGee series, plays a “Game for Blondes.” Of course, veteran SF writers like Murray Leinster, Erie Frank Russell, Fritz Leiber, and Alfred Bester are represented. But Brits like John Wyndham and William F. Temple make their presence known with strong stories. I continue to be impressed by these Bleiler & Dikty anthologies. GRADE: A
TABLE OF CONTENTS:
Trematode, a Critique of Modern Science-Fiction, by Alfred Bester
“The Fly”, by Arthur Porges
“Ararat”, by Zenna Henderson
“Counter-Transference”, by William F. Temple
“The Conqueror”, by Mark Clifton
“Machine”, by John W. Jakes
“The Middle of the Week After Next”, by Murray Leinster
“The Dreamer”, by Alfred Coppel
“The Moon Is Green”, by Fritz Leiber
“I Am Nothing”, by Eric Frank Russell
“Command Performance”, by Walter M. Miller, Jr.
“Survival”, by John Wyndham
“Game for Blondes”, by John D. MacDonald
“The Girls from Earth”, by Frank M. Robinson
“Lover, When You’re Near Me”, by Richard Matheson
“Fast Falls the Eventide”, by Eric Frank Russell
About the Authors