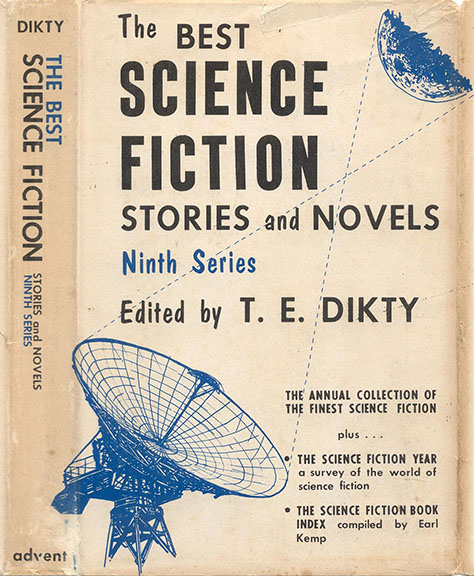 This final volume of The Best Science Fiction Stories and Novels (1958) features Kate Wilhelm’s “The Mile-Long Spaceship”–later to be expanded into a novel and Poul Anderson’s famous “Call Me Joe.” I enjoyed Erie Frank Russell’s “Into Your Tent I’ll Creep.” The rest of the stories in this anthology are average. Anthony Boucher reviewed this book calling it an “assembly of the tedious, trite and ill-reasoned.” THE BEST SCIENCE FICTION STORIES AND NOVELS: NINTH SERIES (1958) is one of the weaker volumes in the Bleiler/Dikty series. GRADE: B-
TABLE OF CONTENTS:
The Science-Fiction Year, by T. E. Dikty
“2066: Election Day, by Michael Shaara
“The Mile-Long Spaceship, by Kate Wilhelm
“The Last Victory, by Tom Godwin
“Call Me Joe, by Poul Anderson
“Didn’t He Ramble, by Chad Oliver
“The Queen’s Messenger, by John J. McGuire
“The Other People, by Leigh Brackett
“Into Your Tent I’ll Creep, by Eric Frank Russell
“Nor Dust Corrupt, by James V. McConnell
“Nightsound, by Algis Budrys
“The Tunesmith, by Lloyd Biggle, Jr.
“Hunting Machine, by Carol Emshwiller
The Science-Fiction Book Index, by Earl Kemp