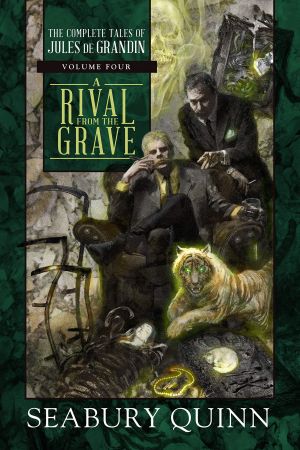 A Rival From the Grave is the fourth volume of the Complete Tales of Jules de Grandin, the detective who investigates the supernatural. Seabury Quinn wrote over 90 of these tales for Weird Tales from the 1920s to the 1940s. In those times, these stories of ghosts and goblins and all manner of eerie creatures proved to be popular with the readership. I’m fond of these atmospheric stories, but I advise you to read them a few at a time. Seabury Quinn developed a template and used his successful storytelling model in nearly all of these scary stories. My reviews of the previous three Seabury Quinn volumes can be found here, here, and here. The fifth and final volume of the Complete Tales of Jules de Grandin will be published in 2019. GRADE: A

10 thoughts on “FRIDAY’S FORGOTTEN BOOKS #503: A Rival From the Grave: The Complete Tales of Jules de Grandin, Volume Four By Seabury Quinn”