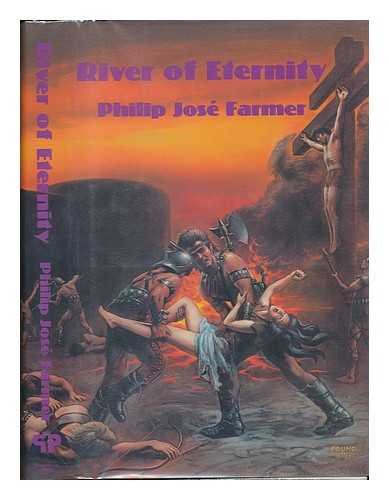 Jerry House mentioned that an early draft of Philip Jose Farmer’s epic “Riverworld” novels was published back in the 1980s. I’d heard rumors about this book, but until Jerry jogged my memory, I’d forgotten all about it (making River of Eternity a truly “forgotten” book in this case). I tracked down a copy of River of Eternity and read it in one day.

Philip Jose Farmer is known for his mind-blowing concepts and Big Ideas. How Big are Farmer’s Ideas? How about a River 40 million miles long! How about every person ever born on Earth resurrected and living along this incredible River! Is that Big enough for you?

Admittedly, Philip Jose Farmer’s Ideas are his strength. His weakness is sketchy characterizations. When Farmer introduces Samuel Clemens, I’m not seeing Mark Twain. There are mysteries and puzzles to solve in Farmer’s “Riverworld” series. River of Eternity has a complicated history that Farmer discusses in his “Author’s Introduction.” I’m glad Phantasia Press published River of Eternity back in 1983, but it reads like a rough First Draft of something much more complex and involving. Are you a fan of Philip Jose Farmer’s “Riverworld” series? GRADE: C+
RIVERWORLD SERIES:
To Your Scattered Bodies Go (1971) – Hugo Award winner
The Fabulous Riverboat (1971)
The Dark Design (1977)
Riverworld and Other Stories (1979) (a Farmer anthology with one Riverworld story titled “Riverworld”)
The Magic Labyrinth (1980)
Gods of Riverworld (1983; later published as The Gods of Riverworld)
River of Eternity (1983) – an earlier version of Riverworld
Tales of Riverworld (1992) (includes one story written by Farmer: “Crossing the Dark River”. A second story, “A Hole In Hell”, was written by Farmer under the pseudonym Dane Helstrom)
Quest to Riverworld (1993) (includes two stories written by Farmer: “Up the Bright River” and “Coda”