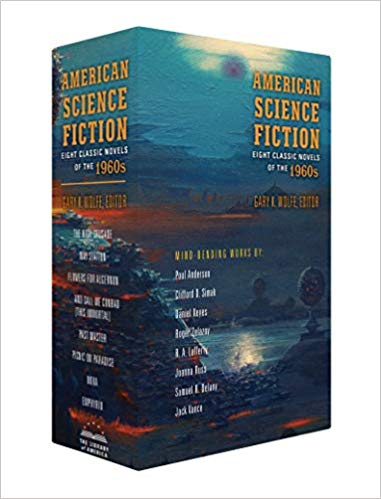 I love these Library of America volumes! Of course, Gary K. Wolfe should prepare for some quibbles about his choices. I’ll start with Volume 1. I like Poul Anderson’s The High Crusade (1960), but I like Anderson’s Tau Zero (1970) better for this decade. Simak’s Way Station (1963) won a Hugo Award and is one of my favorite Simak novels. Daniel Keyes’s Flowers for Algernon (1966) is the expanded version of the classic SF short story. Roger Zelazny’s …And Call Me Conrad (aka, This Immortal) (1965-1966) tied with Frank Herbert’s Dune for the 1966 Hugo Award for Best Novel. But I would have gone with Zelazny’s brilliant Lord of Light (1967) instead.

In Volume 2, Lafferty’s The Past Master (1968) quirky novel is the weakest link in this collection. I can think of dozen better SF novels from the 1960s than Lafferty’s work. Lafferty’s short stories range from incredible to silly. His novel tends more toward silly in this case. Joanna Russ’s Picnic on Paradise (1968) features a strong woman character in a dicey situation. Samuel R. Delany’s Nova (1968) blends cyborgs and tarot cards in a satisfying mix. Wolfe could have gone with Jack Vance’s Hugo Award winning The Dragon Masters (1965) or The Last Castle (1967), but he wisely chose Emphyrio (1969) a more obscure masterwork.

All in all, these Library of America volumes offer an excellent representation of SF novels of the 1960s. The Sixties were a time of change and these novels certainly reflect those changes. Recommended! How many of these SF novels have you read? GRADE: A