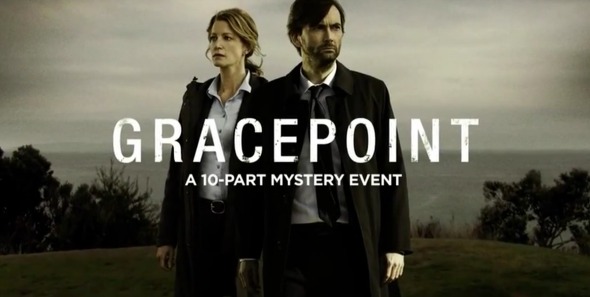 Gracepoint, the American version of the British mini-series Broadchurch, concludes tonight. The producers promised that Gracepoint would have a DIFFERENT murderer than Broadchurch did. Comparing the two mini-series, 95% of the scenes are the same. David Tennant plays the lead police detective in both versions. Tennant is scruffy and dogged. He was part of a botched murder investigation before the Gracepoint murder of a young boy so Tennant’s character seeks redemption by solving this crime. Anna Gunn plays Tennant’s fellow detective, Ellie Miller, whose son was best friends with the murdered boy. I’m guessing Kevin Rankin as Paul Coates, the local priest, is the killer this time. FOX has “cancelled” Gracepoint. But the BBC seems to be working on Broadchurch 2. I’ve enjoyed both versions. Maybe Netflix or AMAZON will pick up this fine series.