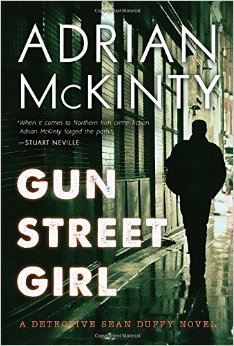 I’ve read Adian McKinty’s “Troubles” trilogy: The Cold Cold Ground, I Hear the Sirens in the Street, and In the Morning I’ll Be Gone. You can read my reviews here and here. Now, the trilogy has been expanded to a fourth book, Gun Street Girl.

First there was The Girl With the Dragon Tattoo, then Gone Girl and The Girl On the Train, and now Adrian McGinty gives us another story of Ireland in the 1980s where his hero, Sean Duffy, has to check his car for bombs before he can drive anywhere. Belfast in 1985 is a cauldron of politics, spies, and murders. Duffy investigates the double-murder of two millionaires and the subsequent “suicide” of their son. None of it adds up for Duffy. Then there’s the case of the missing missiles. Duffy is drawn into the mysterious disappearance of military missiles from a local munitions plant. Gun Street Girl is based on actual events that were going on in Ireland at the time. My only quibble is why don’t the Bad Guys just kill Duffy and end his investigations. But, of course, that would end the Duffy series. GRADE: A-