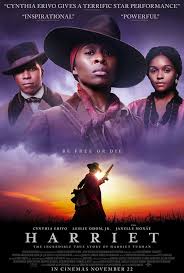 Diane and I finally got around to seeing Harriet, the story of Harriet Tubman. Cynthia Erivo plays the slave turned abolitionist, ROTTEN TOMATOES notes that the movie is “formulaic” and I tend to agree. The movie begins with scenes of racism and brutality on a plantation in Maryland. When Harriet realizes her master intends on selling her, she decides to flee the the North. Harriet, hunted by men and dogs, manages to make the 100-mile trek to Philadelphia where she finds help with William Still–abolitionist, and writer–played by Leslie Odom, Jr.

After a year of working as a domestic servant, Harriet decides she needs to return to Maryland to free her husband and her family. William Still thinks she’s crazy to return to a slave State and risk her freedom…and her life. But Harriet, determined to bring others to freedom, undertakes the dangerous journey. There are some surprises and Harriet’s fate changes when she becomes a “Conductor” on the Underground Railroad. Cynthia Erivo’s performance as Harriet Tubman spans a range of emotions. She delivers some powerful speeches and isn’t afraid to do battle with the slavers. My only quibble is with the pacing of this movie which lurches from action to static scenes to back to action with regularity. GRADE:B