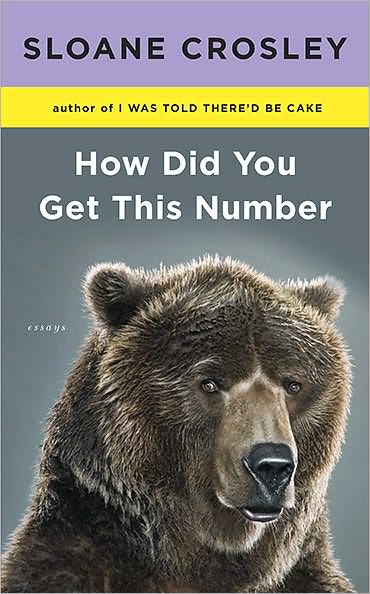 DEDICATION: To my parents. For everything.* We’ll get back to that “dedication” in a few moments. Sloane Crosley is a thirty-something New Yorker with learning disabilities and a snarky personality. These personal essays explore Crosley’s trips to Paris and Portugal (disaster lurks!), her adventures with pets, her encounter with a grizzly cub in Alaska, and a romantic relationship that goes Wrong. I enjoyed Sloane Crosley’s first book of essays, I Was Told There’d Be Cake where we found out about Crosley’s tribulations at an all-girls summer camp. The world of women mystifies me so these reports from the Other Side enlighten me. Now, back to that “dedication”:

*Everything except the two-week period in 1995 directly following the time you went to Ohio for a wedding and I threw a party in the house, which is the most normal thing a teenager American can do, aside from lie about it, which I also did, and Mom eyed me suspiciously for days. morphing into a one-woman Scotland Yard, marching into my bedroom with a fistful of lint from the dryer to demonstrate that I had mysteriously washed all the towels, and then she waited until we were in a nice restaurant to scream, “Someone vomited on my couch, I know it!” and Dad took away my automotive privileges straight through college so that I spent the subsequent four years likening you both to Stasi foot soldiers, confined as I was to a campus-on-the-hill when I could have been learning how to play poker at the casinos down the road and making bad decisions at townie bars. I think we can all agree you overreacted.

For everything except that, I am profoundly grateful. I have only the greatest affection for you now. Also: I vomited on the couch.

10 thoughts on “HOW DID YOU GET THIS NUMBER: ESSAYS By Sloane Crosley”