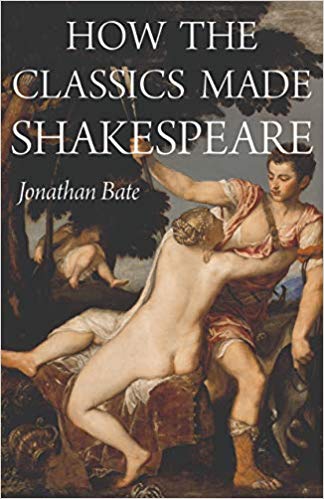 Through careful quotes and citations, Bates shows the effects of Shakespeare’s reading on his writing. If you’re a fan of Shakespeare, you’ll learn a lot about the sources of the Bard’s plots, wit, and humor. Bates also deals with the women characters in Shakespeare and the Puritan influence: “And the relationship between church and the theatre became increasingly strained as ‘Puritan’ polemicists voiced their disapproval of players, especially when adult male actors stared kissing boys dressed as girls.” (p.3)

I particularly enjoyed the analysis of Plutarch and Montaigne as Bates traces their effect on various plays and sonnets. I found How the Classics Made Shakespeare informative and entertaining. What’s your favorite Shakespeare play? GRADE: A
Table of Contents
Preface and Acknowledgments ix
Illustrations xiii
1 The Intelligence of Antiquity 1
2 O’er-Picturing Venus 21
3 Resemblance by Example 36
4 Republica Anglorum 48
5 Tragical-Comical-Historical-Pastoral 64
6 S.P.Q.L. 90
7 But What of Cicero? 106
8 Pyrrhus’s Pause 126
9 The Good Life 146
10 The Defence of Phantasms 160
11 An Infirmity Named Hereos 185
12 The Labours of Hercules 210
13 Walking Shadows 232
14 In the House of Fame 252
Appendix: The Elizabethan Virgil 277
Notes 285
Index 349

12 thoughts on “HOW THE CLASSICS MADE SHAKESPEARE By Jonathan Bate”