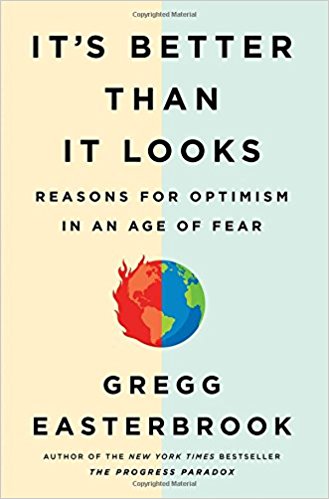 Gregg Easterbrook, who admits from being from Buffalo, provides evidence (the Real Facts) to counteract the constant barrage of messages that America (and the world) is going down the tubes. In fact, people are living longer. More people are surviving diseases that used to be fatal. Food is plentiful. If people are starving, it’s because of logistics not food shortages. Equality world-wide is increasing as education and healthcare improve. Gregg Easterbrook also points out that our Economy is growing as unemployment shrinks. Technology improves with each generation and tends to be more safe to use.

Of course politicians love to claim the Past was better (it wasn’t) and today the world faces “carnage.” People tend to vote when they’re afraid. Yet most of the outlandish claims that American is going to Hell are false. Sure, the opioid epidemic is real. But conspiracies of “child actors” at the border, that the Wall will solve the immigration problem, and the Space Force will protect us gain traction because of technology. Facebook and Tweets and social media of all sorts create the illusion that these fantasies are facts. Many of our problems are self-created. If you’re looking for a book to counteract all the negativity and “Fake News” I highly recommend It’s Better Thank It Looks.” GRADE: A
TABLE OF CONTENTS:
Preface: Optimism Goes Out of Style xi
PART I: Why the World Refuses to End
One: Why don’t we starve? 3
Two: Why, despite all our bad habits, do we keep living longer? 23
Three: Will nature collapse? 41
Four: Will the economy collapse? 64
Five: Why is violence in decline? 104
Six: Why does technology become safer instead of more dangerous? 140
Seven: Why don’t the dictators win? 164
PART II: The Arrow of History
Eight: How declinism became chic 197
Nine: The “impossible” challenge of climate change 226
Ten: The “impossible” challenge of inequality 245
Eleven: We’ll never run out of challenges 266
Twelve: And it will never be too late 282
Acknowledgements 287
Notes 289
Index 319

32 thoughts on “IT’S BETTER THAN IT LOOKS: REASONS FOR OPTIMISM IN AN AGE OF FEAR By Gregg Easterbrook”