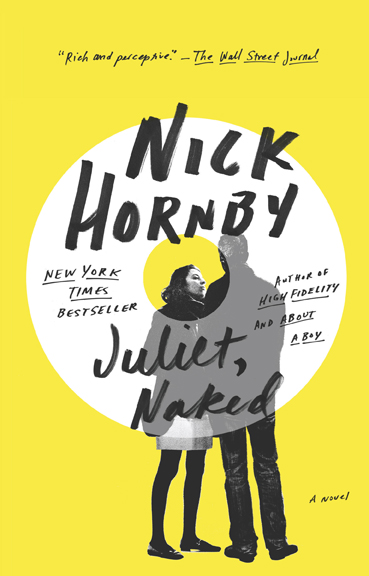 Nick Hornby bursts with confidence: after all he opens his new novel in a toilet in Minneapolis. The Juliet referred to in the book’s title is an actual person–a woman rock star Tucker Crowe once had a passionate relationship with–and an album titled Juliet that chronicles the breakup of that relationship (think Joni Mitchell’s Blue). Shortly after that album’s release, Tucker Crowe left that rest room in Minneapolis and mysteriously retired from the rock world. Now, 20 years later, another Tucker Crowe album has been released: Juliet, Naked made up of Crowe’s early acoustic version of those songs. The Tucker Crowe obsessive Internet community, is rocked by this news. Brits Duncan and Annie, after visiting all the important Tucker Crowe American sites, find upon their return to the placid English community of Gooleness, that their relationship is disrupted by Juliet, Naked. Duncan considers it a masterpiece, Annie prefers the older studio version of Juliet. When Annie writes a review for the Tucker Crowe blog, she gets an amazing response, from Tucker Crowe himself. Although Juliet Naked is more discursive than Hornby’s other novels like High Fidelity and About a Boy, Hornby explores obsession and the fragility of relationships in this latest novel. GRADE: B