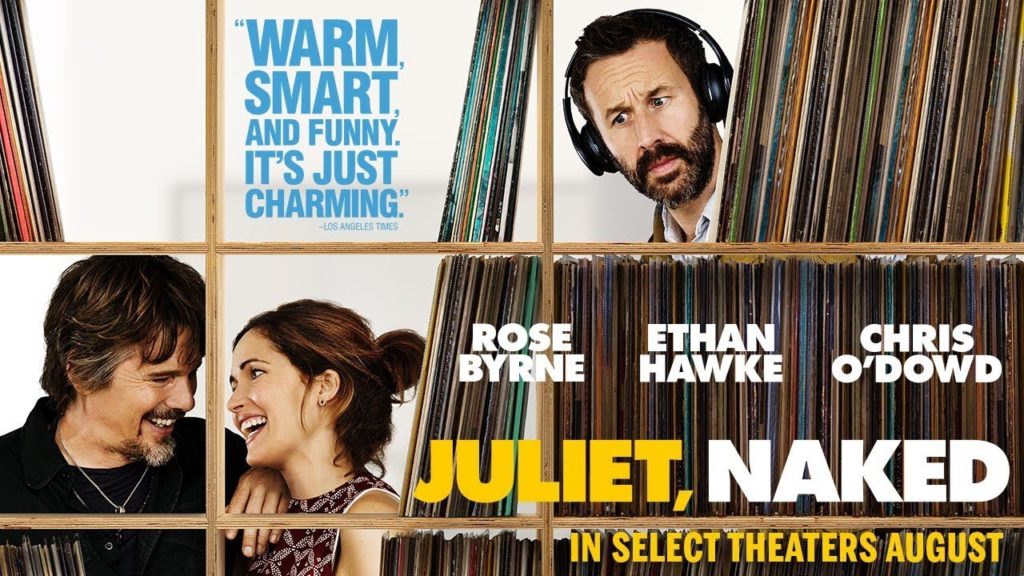 Rose Byrne plays a woman whose professor boyfriend (Chris O’Dowd) is obsessed with an American singer/songwriter, Tucker Crowe (Ethan Hawke). Yes O’Dowd’s character actually has a whole room with walls covered with Tucker Crowe posters and photos. Tucker Crowe released an album titled Juliet, Naked 25 years ago and dropped out of the music scene. O’Dowd’s character and hundreds of “fans” like him spend hours in chat rooms and tweaking their web sites with the latest nugget of news (or gossip) about Tucker Crowe. Crowe, meanwhile, has been busy making babies with various women. Now, on the verge of becoming a grandfather, Crowe decides to reconnect with his children, especially a pregnant one in London, England. Rose Byrne’s character, feeling that she’s wasted the last 15 years with her obsessed boyfriend, leaves a message in the Tucker Crowe chat room and guess what? Tucker Crowe answers! The relationship starts out with texts, but develops into Something More. If you’re in the mood for a quirky comedy, give Juliet, Naked a try. This movie is based on Nick Hornby’s book of the same name. You can read my review of Hornby’s book here. GRADE: B+
SOUNDTRACK:
Sunday Never Comes
LAX
What to Do When You’ve Wasted 15 Years of Your Life
We’re in Trouble
Juliet
20th Call of the Day
Waterloo Sunset
The Reality
I Know Annie
War & Peace
LAX
Sunday Never Comes
Juliet
20th Call of the Day
LAX