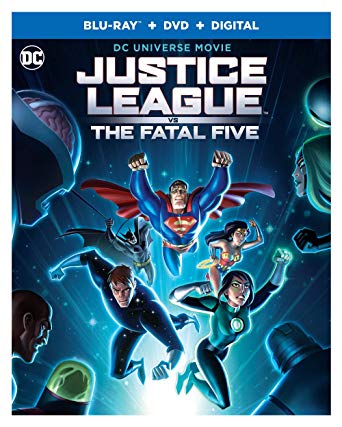 This latest DC animated feature centers on two characters: Jessica Cruz (aka, Limelight) and Thom Kellor (aka, Star Boy). Both characters struggle with mental problems. Jessica Cruz deals with incredible anxiety every day. Thom Kellor suffers from schizophrenia, but 31st Century medicine allows him to control his condition. But, when Star Boy gets thrown back to the 21st Century, he doesn’t have the necessary medication. He is sent to Arkham Prison by Batman. Meanwhile three villains from the future arrive on Earth and cause havoc. Even Superman is injured fighting them.

I enjoyed Justice League vs. The Fatal Five because the story included superheroes dealing with personal problems. To watch a young woman like Jessica Cruz deal with crippling anxiety to take on Mano, Persuader, and Tharok was thrilling. Kellor’s schizophrenia plays an important role in the plot. And Emerald Empress and Validus come off as powerful adversaries. Superman, Batman, Wonder Woman, Miss Martian, and Mr. Terrific have their hands full battling these Bad Guys from the Future.

Special features include 2 Bonus Justice League cartoons, a Sneak Peek at the upcoming Batman Hush, The Unity of the Hero, and audio commentary on Justice League vs. The Fatal Five. These DC animated features just keep getting better and better! GRADE: A

2 thoughts on “JUSTICE LEAGUE VS. THE FATAL FIVE [Blu-ray]”