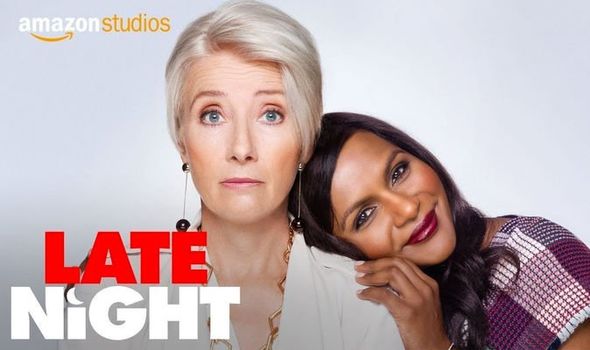 Mindy Kaling wrote and stars in Late Night, a movie that is being marketed as a comedy–but is actually a drama. Emma Thompson brilliantly plays Katherine Newbury, the only woman hosting a late night U.S. talk show. The character of Katherine Newbury is arrogant, acerbic, and driven for Perfection. Newbury doesn’t bother to learn the names of her writers, she simply assigns them numbers for identification (Mindy Kaling’s character, Molly Patel, is Number 8).

The obvious problem confronting Katherine Newbury is that her show is losing its audience. Ratings are falling. Newbury ignores the Internet and Social Media which alienates her from attracting a younger audience. The Network plans to cancel Katherine Newbury’s show. Although Newbury has no friends or children, she does have a husband played by John Lithgow who suffers from Parkinson’s disease. And that becomes a problem, too.

The movie starts out focused on Molly Patel breaking into an all white male writers room, but shifts to Katherine Newbury’s struggle to hold on to her TV show. Yes, there’s humor. Emma Thompson performs a stand-up session where she initially fails to connect with the audience, but then finds her mojo and leaves them laughing. Very clever acting and writing.

It’s early in the movie season, but I’d nominate Emma Thompson for Best Actress based on this performance. GRADE: B+